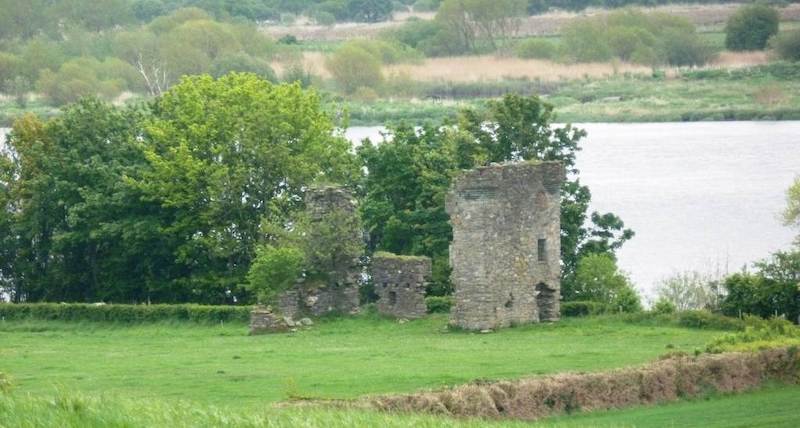 Steps are being taken to bring the municipal district of Lifford-Stranorlar and Valladolid closer together in Spain and promote a major tourism strategy.

The project is the brainchild of the Red Hugh Ó Donnell Committee, Lifford.

Last Monday, Mr. Crawford, a member of the committee, and Carlos Burgos, president of the Spanish-Irish Association, addressed the Lifford-Stranorlar MD meeting.

Some of the main aims of the Red Hugh Ó Donnell, Lifford Committee are the preservation of Mongavlin Castle, St Johnston (main photo), the birthplace of the famous chef and the twinning of areas around Lifford with Valladolid.

The committee also proposes to erect a statue of Red Hugh in the Diamond, Lifford.

A recent visit to Mongavlin Castle, birthplace of Red Hugh.
On the left is Eddie Crawford, Chairman of the Red Hugh O’Donnell Lifford Committee and Brendan Rohan who created the initial seed in Valladolid, Spain, which led to the current search for Red Hugh’s remains.

“We originally had a 15 minute slot at the meeting but there was such interest from county councilors that it was extended to almost 50 minutes,” Mr Crawford added.

“In my opening speech I mentioned the current search for the remains of our great East Donegal chief, Red Hugh O’Donnell, in the former capital of Spain and how the initial seed was set in 2019 by our good friend, and committee member, retired Commander of the Irish Defense Forces Brendan Rohan.

Mr. Crawford said there is huge potential to promote our two regions and generate much needed tourism and financial benefits.

“Carlos then talked about his recent trip to Ireland and how beautiful our country is with all its colors of green,” he explained.

“How special it was for him to visit Mongavlin Castle and how sad to see such a beautiful building fall into disrepair.”

Carlos also spoke of his visit to Lifford and the beautiful buildings around the Diamond which was the seat of power in Donegal for centuries.

Carlos then spoke about the search for Red Hugh in Spain and how it was and continues to make headlines around the world.

“He then explained how Valladolid City Council will be unveiling a plaque at Red Hugh’s burial site in the coming months and invited a council delegation to attend and further explore how our two areas can work together.”

In summary, Mr. Crawford highlighted how the Valladolid City Council took the seed that Brendan Rohan created, nurtured it and brought it to the world stage.

“And we have now set up a similar seed for our region in East Donegal and hope that the Council will take the same approach as their counterparts in Valladolid,” he concluded.