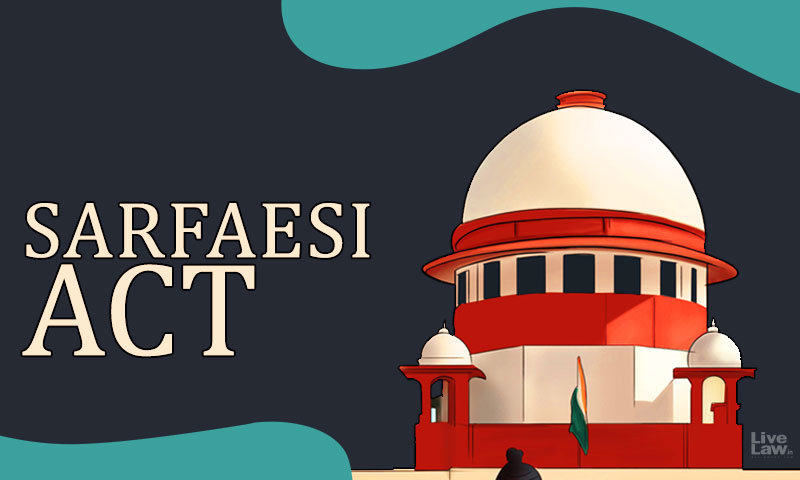 Borrower cannot request release by paying only the bid amount or the higher reserve price if bank assessments are higher: Supreme Court

The Supreme Court ruled that a borrower cannot redeem the mortgaged property put up for public auction by the bank by paying only the auction reserve price or even the amount of the highest bid.

Under section 13(8) of the Securitization and Reconstruction of Financial Assets and Enforcement of Security Act 2002 (“SARFAESI Act”), the transfer of mortgaged property at public auction cannot be blocked only when all fees and all costs, charges and disbursements are paid to the Bank before the date fixed for this transfer, the Court ruled.

“Unless the borrower was prepared to deposit the full amount outstanding together with fees and expenses, the DRT could not have blocked the auction by ordering him to pay only the reserve price” , the Court observed.

The Supreme Court noted that release of possession and original title to the mortgaged property cannot be obtained by the borrower from the bank, until the borrower has paid all outstanding liability to against him.

A bench comprising Judges MR Shah and Sanjiv Khanna allowed an appeal by the Bank of Baroda challenging the order of the Bench Division of the High Court of Rajasthan, which had ordered the bank to release the mortgaged property and return possession and original title deeds to a borrower for payment of partial duties.

Bank of Baroda has extended a term loan of Rs 100 lakhs and a cash credit limit of Rs. 95 lakhs at M/s. Karwa Trading Company (“Borrower”) against two properties – industrial land and residential property. The borrower did not repay and on 31.10.2012 his account became NPA.

Subsequently, the borrower was given notice under Section 13(2) of the SARFAESI Act for a sum of Rs. 1,85,37,218.80. Implied possession of the immovable property has been taken and the bank has issued a notice pursuant to Article 13(4) of the SARFAESI Act.

Finally, on 25.11.2013, the bank took possession of the mortgaged apartment building with it. A notice of sale was issued on 16.12.2013 for the public auction of the property and the reserve price was set at Rs. 48.65 lakhs. The auction was challenged by the Borrower under Section 17 of the SARFAESI Act before DRT, Jaipur, which passed an Interim Order ordering the Borrower to deposit Rs. 20 lakhs on the day of the auction and payment of the balance of Rs. 28.65 lakhs as of 27.01.2014. If such a deposit is made, the bank is responsible for returning possession to the borrower. The borrower made the payment as instructed. The interim order was challenged by the bank before the DRAT. He argued that if the borrower was interested, he could redeem the property by paying the due of Rs. 2 crores or at least pay Rs 71 lakhs, which is the highest bid at public auction. The DRAT dismissed the appeal, which was challenged before the Single Judge of the High Court of Rajasthan. It quashed the orders of the DRT as well as the DRAT finding them contrary to Article 13(8) of the SARFAESI law. The borrower was successful in the appeal before the division bench and the bank was ordered to vacate the residential property and return the title deeds to the borrower depositing Rs. 17 million.

Grounds raised by the appellant

Lawyer, Ms. Praveena Gautam appearing on behalf of Bank of Baroda argued that the borrower did not come forward to redeem the property but to bid for the property as buyer upon payment of the reserved price. She pointed out that the same was also noted by the division bench. It was claimed that when the notice under Section 13(2) was issued, the dues amounted to Rs. 1,85,37,218.80. Hence, the borrower cannot be discharged from liability by paying Rs. 71 lakhs for the mortgaged residential property. It was clarified that the bank had agreed to hand over possession for Rs. 71 lakhs, but without waiving liability for unpaid dues. She challenged the Division Bench Order for being contrary to Section 13(8) of the SARFAESI Act, which reads as follows –

It has been pointed out that when the Interim Order adopted by DRT was limited to handing over possession upon payment of the reserve price i.e. Rs. 48.65 lakh, it was not appropriate for the bench to division to release the borrower from all liability on the payment of Rs. 65.65 lakhs.

Arguments raised by the respondent

Lawyer, Ms. Christi Jain appearing on behalf of the borrower argued that the bank had agreed to release the property upon payment of Rs. 65.65 lakhs. She also maintained that the borrower was ready to pay Rs. 71 lakhs which was the highest bid received by the bank.

Analysis by the Supreme Court

The Court noted that the borrower failed to deposit the full amount of the contributions he was required to pay under Article 13(8) in order to prevent the bank from transferring the mortgaged property. It was observed that the division bench was aware that the borrower had offered Rs. 71 lakhs as a buyer and not to redeem the property. Therefore, the order issued by the Division Bench contravened Section 13(8) of the SARFAESI Act. The Court held that by paying Rs. 71 lakhs the borrower could not have been discharged from his liability which was at least Rs. 1,85,37,218.80. Even though the bank auctioned the property to a third party for Rs.71 lakhs, the borrower was liable to pay the outstanding dues. It was also noted that the DRT could not have ordered the borrower to make partial payment and take possession when Article 13(8) clearly required the duties to be paid in full in order to block the transfer of the relevant property in the auction process.

Section 13(8) of the Securitization and Reconstruction of Financial Assets and Enforcement of Security Act 2002 – If the sums due by the secured creditor together with all costs, charges and expenses incurred by it are remitted to the creditor secured at any time prior to the date fixed for sale or transfer, the secured property shall not be sold or transferred by the secured creditor, and no further action shall be taken by him for the transfer or sale of such secured property – L The borrower did not deposit all of the sums due with the bank, so the bank could have sold the mortgaged property at a public auction.

Section 13(8) of the Securitization and Reconstitution of Financial Assets and Enforcement of Security Act 2002 – Even by paying the highest bid amount, the borrower cannot be relieved of liability for the outstanding amount due to be paid to the bank.

Section 13(8) of the Securitization and Reconstruction of Financial Assets and Enforcement of Security Act 2002 – Even if the mortgaged property was sold to a third party at a price below the arrears, the remaining amount was to be paid by the borrower.

Section 13(8) of the Securitization and Reconstruction of Financial Assets and Enforcement of Security Act 2002 – Unless the borrower has been prepared to deposit the full amount outstanding together with fees and expenses , the DRT could not have blocked the auction by ordering it to pay only the reserve price.

Some investors may be concerned about Baikowski’s capital returns (EPA:ALBKK)