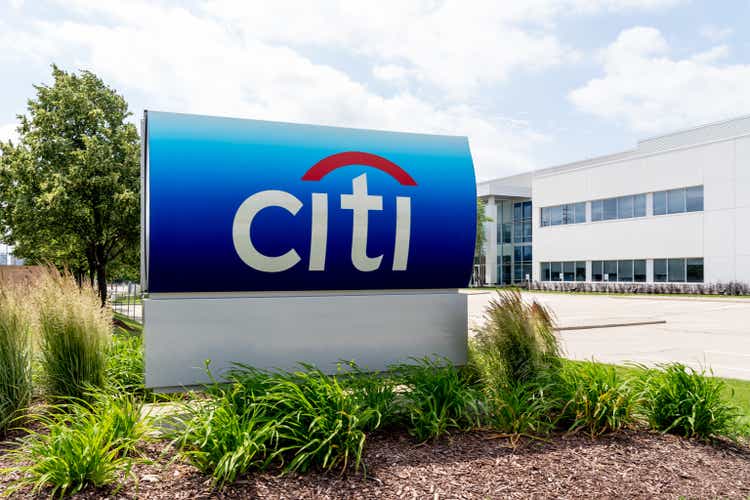 Not much has changed over the years, but the market is still wrong about Citigroup (NYSE:C). As banks face a tough economic scenario here in mid-2022, Citigroup has already weathered a rather weak second quarter and the stock is incredibly mispriced by the market and so far trading below tangible book value. My investment thesis remains bullish on the big bank.

Spend for the future

Citigroup fell earlier this year on the big bank’s plans to spend on technology to improve risk mitigation and modernize systems. The market has over-extrapolated this increase in spending as a sign of weakness as other companies in the industry are able to cut costs.

The best part of the second quarter report is that the US economy may already be in a recession and the big bank actually thrived in the quarter. Revenue rose 11% to $19.6 billion, helping Citigroup offset rising costs while generating a 63% efficiency rate.

On the contrary, the additional spending appeared to match the strength in activity thanks to higher net interest income, which rose 10% quarter-on-quarter to $12.0 billion. The bank had 223,000 employees at the end of 2021 and struggles to match the efficiency of JPMorgan Chase (JPM) which gets more than $130,000 in additional revenue per employee.

The bank just forecast another $1.8 billion rise in net interest income in 2H after the $2.0 billion increase in 1H. The Fed just raised interest rates by 75 basis points and these higher interest charges will help offset rising technology and credit costs.

The market is pricing in further earnings weakness in part due to higher borrowing costs, but Citigroup is still expected to top EPS of $7. Even taking into account all the known and now expected economic weakness, the unloved bank is expected to produce what would equate to $13.5 billion in annual profits.

The biggest problem facing Citigroup and big bank stocks is regulators increasingly imposing restrictions on the company at the worst times. Due to the lingering effects of the financial crisis, capital ratios are still being raised just when the big banks are expected to buy extremely cheap stocks.

Citigroup has a tangible book value, or TBV, of $80.50 per share while the stock currently trades at just $51.90. The big bank is expected to buy shares well below TBV here, but regulators have gotten to where Citigroup has raised the CET1 ratio to 11.9%, but the bank still doesn’t have enough capital.

Regulators increased the Stress Capital Buffer from 3.0% to 4.0%, bringing the October 2022 CET1 regulatory requirement to 11.5%. Citigroup is already up 11.9%, but the bank doesn’t have much leeway there.

Additionally, the GSIB surcharge will increase to 3.5% from 3.0% in January. Citigroup will therefore be forced to maintain a CET1 ratio of 12.0%, whereas the effective minimum requirement is only 4.5%.

Additionally, management wants the internal buffer to include an additional 100 basis points, pushing CET1 targets to 13.0%. Citigroup must now raise the capital ratio by 110 basis points before returning to share buybacks.

These numbers are ridiculous for Citigroup or any bank to now have 7.5% capital on top of the effective minimum capital. In the recent CCAR, Citigroup found itself with the minimum CET1 ratio of 9.0% in the worst possible financial scenario, unlikely to occur in the next 100 years.

The company made this statement on redemptions and capital returns during the Q2’22 earnings call:

We will generate significant capital given our earnings capacity and the finalization of the disposals in progress. We know how important buybacks are to building shareholder value, especially when trading at these levels, and we are committed to re-running them as soon as it is safe to do so.

Citigroup will continue to pay out what equates to a 4% dividend yield. Ultimately, the big bank will have substantial capital and share buybacks will return soon enough. Going forward, the bank is likely to see its capital requirements reduced, giving it another extra boost. Not being able to use the additional capital does not eliminate the capital.

The key investor takeaway is that Citigroup is unlikely to trade well below tangible book value. The bank generates a substantial amount of profit and any reduction in share buybacks over the next year only strengthens the capital position of the major financial company to easily survive and thrive during any economic downturn over the course of the year. Next year. Investors should take advantage of any weakness to buy the stock well below tangible book value.