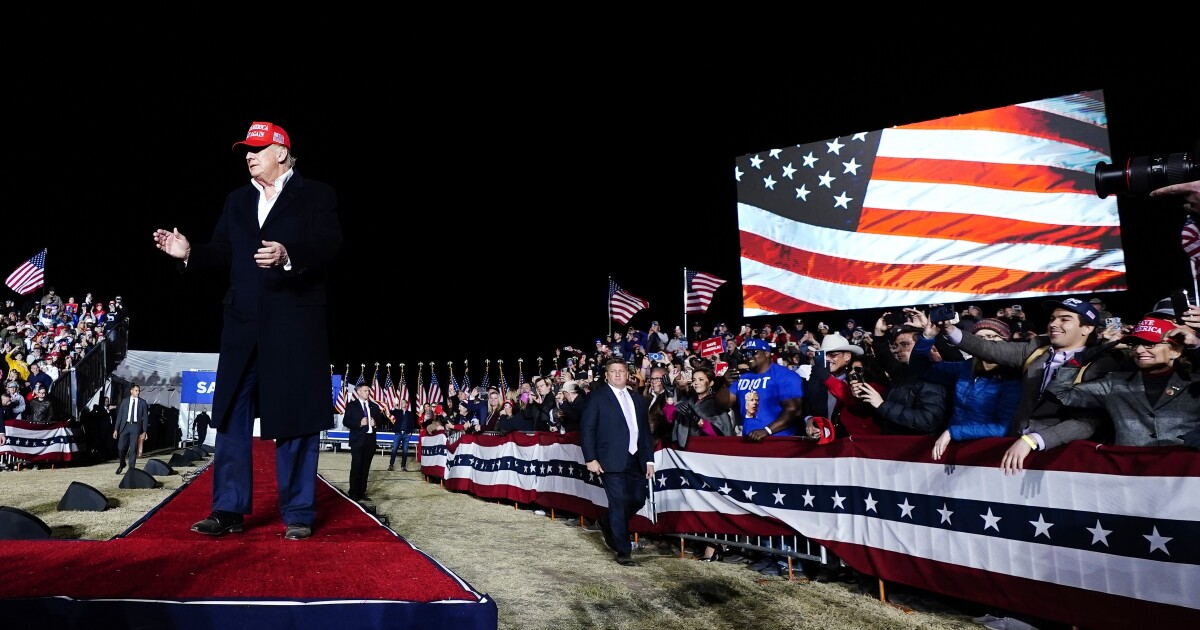 Donald Trump is counting on me. He told me.

“Michael, I need your help,” the former president said in an email Wednesday.

His people have pointed out how important I am to him.

“When President Trump considers all his best patriots, he thinks of YOU, Michael. YOU I’ve been his number 1 supporter from the start, and we want you to know that didn’t go unnoticed,” a subsequent email said Wednesday.

A day earlier, however, they let me know that Trump was not very happy with me.

“We just received the email below from President Trump. He’s disappointed you weren’t on the first list of entries to win lunch with him in FLORIDA,” they wrote on Tuesday.

From Trump’s purported email: “Why didn’t my top supporters help win a trip to meet me in Florida?” I really want them with me as a VIP guest.

Yeah, somehow I ended up on Trump’s fundraising mailing lists. For the record, I am not a supporter or one of his top patriots and, if anyone cares, I am a registered “No Party Preference” voter. I have not been in contact with any of the Trump organizations or responded to any of their missives. They certainly know how to get in touch with me, though.

Between November 9 and Friday, I received 74 emails from Trump organizations. That’s an average of about one a day. Often two arrived in a day, sometimes three – and, at least twice, four in one day. These are not repetitions; every email is different.

The channel actually started before that, but I deleted I don’t know how many before I realized something weird was going on.

Fundraising through massive email campaigns is common. The same goes for generic messages adapted to include the recipient’s name. But the volume in this case is breathtaking.

The vast majority come from Trump’s Save America Committee. A few belong to the Republican National Committee, but the messages and tone are similar.

I get a lot of email press releases, requests to participate in something, and contributions from all kinds of political groups — Democrats, Republicans, and others. But they almost always come to my work email. These are addressed to my personal email. There’s no sign in the emails that the committees know what I do for a living.

This first-hand look at Trump’s relentless fundraising tactics raises the question, even the worry, of how someone less detached might react after being inundated with so many emails for so long. The pressure on a genuine Trump supporter to contribute seems great.

For a contribution of any size, the emails promise all sorts of perks: early information on new Trump paraphernalia, exclusive memberships, a Trump card and more. Perhaps most importantly, they provide a sense of being special by officially joining Team Trump.

Meanwhile, the emails insinuate that Trump knows if you haven’t.

It’s unclear how much Trump has raised to date, as his committees only need to report their financial situation to the Federal Election Commission twice a year. But his reputation as a prolific fundraiser seems solid. By the end of July, its various operations had $100 million at its disposal, according to dispatches.

The Washington Post in October said it had consistently raised over $1 million per week – sometimes close to $2 million. This was done through emails, text messages, events and advertisements. Because they aren’t technically campaign committees, they face looser restrictions.

The year-end report is expected to be released at the end of this month and it will come as no surprise if the totals are mind-boggling. It’s also unclear what Trump has spent and will spend the money on, though there’s clear potential for him to be used to be a factor in this year’s midterm elections and help a race. presidential in 2024.

There were quite a few comments and criticisms last year noting that Trump failed to use his political funds to help fund the various election audits, ballot reviews and recounts he encouraged of his defeat. 2020 election against Joe Biden. He still maintains, without any proof, that the election was stolen from him.

Voter fraud is a recurring theme in the emails I have received. There are others :

But these issues are secondary to fundraising.

On December 20, an email was sent with the subject “Trump Christmas Store.”

“For a short time, when you donate $75, we’ll send you one of our ICONIC Trump Save America Christmas ornaments. FREE,” It said.

Along the same lines, I was told in a Jan. 18 email that Trump is “proud to let you know that you have been identified as a Trump’s MVP.

“All you have to do is make a contribution of ANY AMOUNT and you will automatically achieve MVP status and become a Official Trump 2022 MVP.”

Emails attempt to flatter, cajole and intimidate. (“I was told you didn’t step up. ‘We have an opportunity you can’t refuse.'”What happened? Is your email working?”)

The grand prize is a meeting with the man himself (and a photo) at Mar-a-Lago on February 11. This offer carried fine print familiar to so many sweepstakes.

“NO PURCHASE, PAYMENT, CONTRIBUTION OR TEXT MESSAGE NECESSARY TO ENTER OR WIN. **Contributing or sending a text message will not improve your chances of winning.”

Several emails urged me to act now because time is running out. The times listed have come and gone, many times. There have been several “last chance” and “last chance” offers.

In December, Trump warned me three times: “This is my last email.”

Goes to Scott Lewis (@vosdscott), editor of the Voice of San Diego.