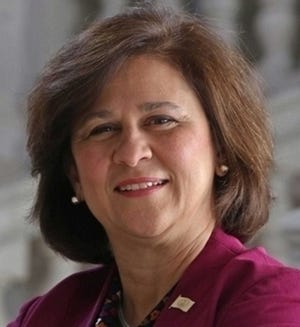 PROVIDENCE – Four of the five Democratic candidates for governor of Rhode Island took turns answering questions about public funding for abortions, higher taxes for the wealthy and a rapid move to a $ 19 minimum wage. time Sunday night, when they first appeared together.

They weren’t standing on the same stage.

But one after another, the four Democrats defying outgoing Governor Dan McKee answered questions posed to them at an online forum hosted by the RI Democratic Women’s Caucus.

On some issues there was no disagreement. In response to this question, for example – “As governor, would your budget include [state dollars for] abortion coverage for Medicaid recipients and state employees?” – they each said yes, an unqualified yes.

But Foulkes has more than once refrained from embracing the proposals favored by her competitors.

These were their answers when asked, for example, if they would each support “raising taxes for the rich”.

Brown said, “Yes, the wealthiest people in this state pay the lowest part of their income in state and local taxes. That’s not true.”

Gorbea: “I think we need to re-examine our tax structure. Those who are able to pay more should pay more.”

Foulkes: “I want to make sure that Rhode Island [is] as competitive as possible, attracting more businesses, more people, and ensuring it’s an affordable state for everyone. »

On raising the state’s hourly minimum wage from $12.25 to $19, Brown: “Absolutely and that includes tipped workers.”

Munoz said, “I support a living wage through a supplemental pay package. I don’t think $19 is enough.”

Gorbea said: “At the moment it’s an arbitrary number and we have to work towards a living wage.”

While Rhode Island is already on track to gradually hit $15 an hour, Foulkes said, “I’m glad we’re moving up from where we are today, just over $12, and I would like to assess when we get there what more needs to happen.”

In the flash round, three of the four said they would support “education being a constitutional right,” Munoz insisting that this be paired with a radical overhaul of the state’s education funding formula.

Foulkes has never said what she thinks about enshrining the right to a good education in the state Constitution, saying instead that she would focus on “using a lot of that [federal American Rescue Plan] money to invest in our children and make sure we raise them.”

And these are their answers to one of the funniest and most revealing questions: “Which political figure, living or dead, do you most admire?”

Foulkes named his late mother’s longtime friend Martha Buonanno, since college, United States House Speaker Nancy Pelosi, saying, “I think she’s been shaking things up in this country. She’s a fighter out of all of us. There’s a lot of politicians talking about a big story, and it’s full of action.”

Gorbea’s first choice would be Thomas Dorr, who in 1842 led a group of agitated Rhode Island reformers to forcibly seek to free their state from the shackles of an antiquated royal charter. “The push for greater suffrage was a key struggle that I supported,” she said.

Brown named the late civil rights activist and U.S. Representative John Lewis, and Munoz named activist/journalist Ida B. Wells and “the courage that Bobby Kennedy had the last 90 days of his life.”

Currently, there is no declared Republican candidate for governor, though Rhode Island newcomer Ashley Kalus leaked notice to the Board of Elections that she created a committee to test the waters for a possible GOP race. She filed the notice under her married name, Ashley Weinzweig.

Democrat McKee’s campaign manager Brexton Isaacs said the governor was unable to participate in the Sunday night online forum due to a “scheduling conflict” but “looks forward to sharing his vision and participate in candidate forums as part of the campaign process”.

He didn’t specify, but it seems he was referring the Democratic Governors Association meeting in Florida he was planning to attend this weekend.

For those unfamiliar with the genesis of the women’s caucus, he “divorced” himself from the state Democratic party in 2019 in response to decisions by party leaders to prohibit them from endorsing candidates, spending money or making statements – as a group – without the approval of the party president.

It was a nasty divorce.

Political scene:Do voters care that a candidate is a “Lifetime Rhode Islander”?

Heading into Sunday night’s event, the Women’s Caucus said, for the record, that it does not currently support, “as an organization, any of the gubernatorial candidates and has asked all candidates Democrats to participate”.

And further: “The current mission of the Women’s Caucus is to support RI political candidates who uphold Democratic principles and identify as and with women.”