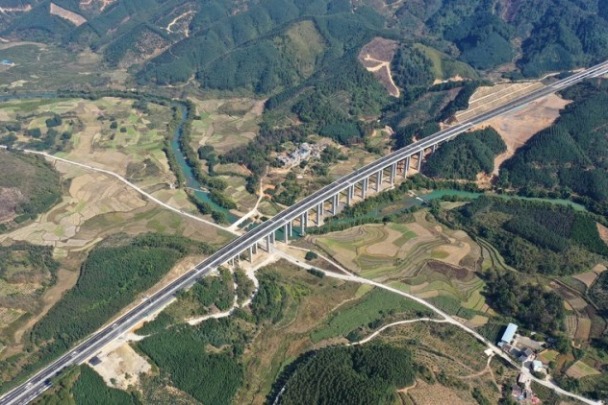 National roads will reach almost half a million km

China on Tuesday unveiled a new plan to expand its national road network to about 461,000 kilometers by 2035, as part of its broader initiative to build a modern, high-quality and comprehensive national transportation network, officials said. managers and experts.

As China’s economy faces downward pressures and uncertainties both at home and abroad, they said the construction of the national highway system will also play a key role in stabilizing investment and economic growth, as well as in enhancing connectivity between China and other markets along the “Belt and Road”. .

The new plan, issued jointly by the National Development and Reform Commission and the Ministry of Transport, aims to increase the length of expressways to 162,000 km and that of freeways to 299,000 km.

Zhou Xiaoqi, deputy director of the NDRC’s infrastructure development department, said the new plan will help support the construction of China’s new development paradigm of “dual circulation,” which takes the domestic market as the mainstay. while letting domestic and foreign markets strengthen each other, and it will also support the development of new urbanizations and contribute to the expansion of high-level opening up.

Under the plan, China will further streamline its transportation network that connects provinces, city groups and counties, helping to facilitate favorable circulation in the Chinese economy, strengthen connectivity between city groups and metropolitan areas, further strengthen connections between domestic highways and land ports, and form international highway crossings between China and other countries in Northeast Asia, Central Asia, South Asia South and the Association of Southeast Asian Nations, Zhou said at a press conference in Beijing on Tuesday.

He said that since the period of the 13th Five-Year Plan (2016-2020), road construction investment has accounted for about 2.4 percent of China’s GDP.

“The plan is not only a long-term investment that can improve China’s economic growth potential, but also marks a key step to stabilize the economy, employment, expectations and boost near-term growth. “said Chen Jia, a researcher at the International Monetary Institute of Renmin University of China.

As China’s economy faces multiple pressures from a complicated external environment and COVID-19 outbreaks, it is necessary for the government to step up support for fiscal and monetary policy, including long-term investment in areas critical to people’s livelihoods and infrastructure investment, which will help stabilize the economy and employment, Chen said.

Chen added that the national smart road network will also provide strong support for China’s upcoming initiatives to develop smart city networks and a smart Internet of Things, as well as embark on the road to peak carbon and neutrality.

He explained that the central government will generally allocate funds to build highways, which will help relieve financial pressure on local governments and boost local economies through the implementation of projects. And it will also allow local governments to attract more investment in industrial projects along the national road network.